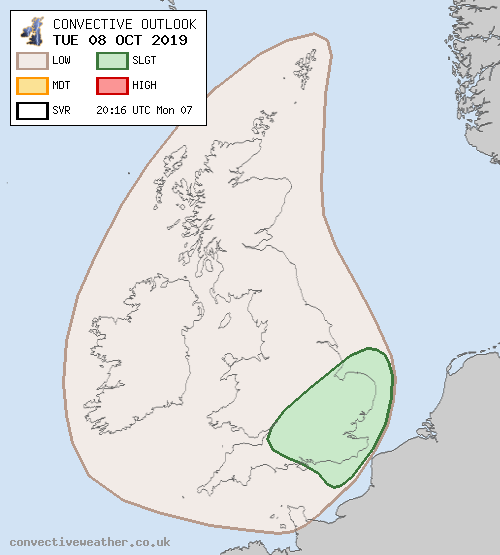 Broad westerly flow covers the British Isles through Tuesday, with a couple of troughs moving through in the flow. These will provide the focus for more organised bands of showers to move eastwards - one in particular will cross England and Wales during Tuesday daytime. Either side, numerous scattered showers will affect western areas throughout the forecast period, increasing in coverage across the English Channel too during Tuesday night.

For the most part, instability is a little marginal for much in the way of lightning - however, strong shear and steep mid-level lapse rates aided quite a few lightning strikes on Monday evening over western Scotland and NW Ireland, and it is likely a similar magnitude of shear over the Midlands, southern and eastern England combined with strong forcing aloft and marked mid-level dry intrusion will aid in some sporadic lightning across these areas during Tuesday afternoon (moreso as they move offshore to the North Sea) - and so a low-end SLGT has been issued, despite somewhat restricted convective depth. Hail and gusty winds will accompany the most intense cells.