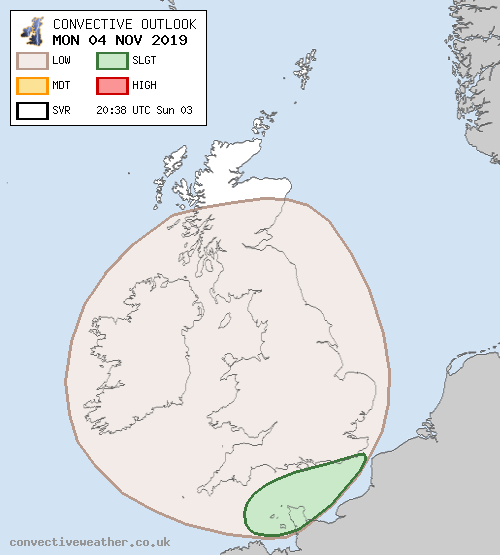 Large upper vortex will reside over the British Isles throughout Monday, creating an environment with steep mid-level lapse rates and a few hundred J/kg CAPE in response to SSTs. While persistent rain will affect portions of Scotland, scattered showers will affect many other areas, particularly coastal counties exposed to an onshore flow since the deepest convection will generally be found over open waters of the Irish / Celtic Seas and English Channel.

Unlike previous days, convective depth should be significantly deeper although weak shear and rather saturated profiles will tend to inhibit much in the way of lightning. A few isolated strikes will be possible, with the greatest risk considered over the English Channel (especially close to the Channel Islands), and as such a low-end SLGT has been introduced. The Bristol Channel and coasts of SW Wales / N Devon / N Cornwall could be another area where some sporadic lightning may occur, but with lower confidence. This overall setup is conducive to a few funnel clouds or waterspouts.