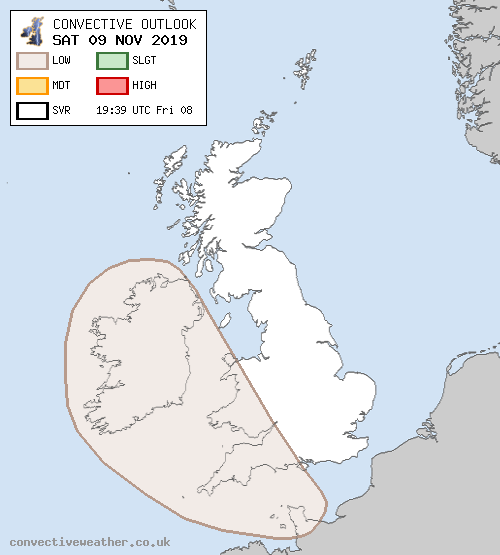 As the upper trough over Ireland disrupts, the Atlantic frontal zone and associated band of cloud/rain will tend to stall over Wales / Midlands / S England / Northern Ireland, before eventually pulling away to the south. Behind this front, the post-frontal environment will be characterised by cool air aloft atop relatively warm SSTs, resulting in steep mid-level lapse rates and a few hundred J/kg CAPE. As such, scattered showers will affect parts of Ireland, and later into Wales and SW England, and eventually the Channel Islands from Saturday evening onwards. A few isolated lightning strikes may occur with this activity.

During the early hours of Sunday, scattered showers will likely return to some parts of eastern England from the North Sea - but the shallow nature of this convection suggests the risk of lightning is very low.