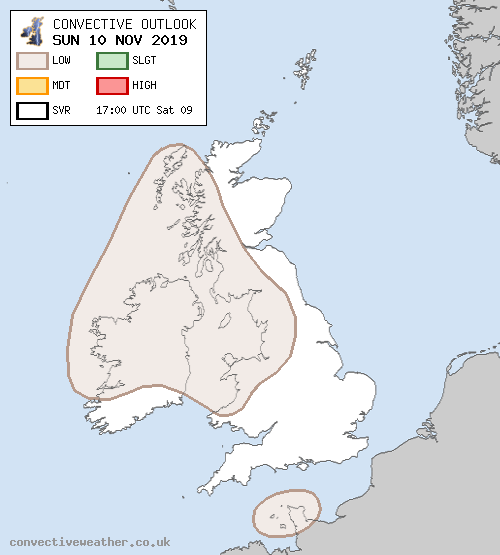 An upper vortex close to the Channel Islands early on Sunday morning will quickly retreat southwards across France, leaving much of the British Isles under broad upper ridging during daylight hours. Late in the afternoon the next Atlantic frontal system will arrive, spreading cloud and rain across Ireland initially, and then most of Britain through Sunday night.

The post-frontal environment will arrive across western Ireland by late evening, then spread across the Irish Sea into western Britain during the early hours of Monday. This will be characterised by cool air aloft atop relatively warm SSTs, resulting in steep mid-level lapse rates and a few hundred J/kg CAPE. As such, scattered showers will affect parts of Ireland, and later into W / NW Britain. A few isolated lightning strikes may occur with this activity.