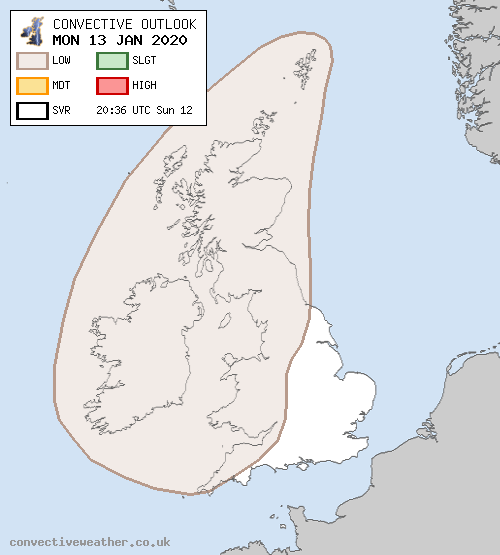 An active cold front will sweep eastwards across the British Isles during Monday, characterised by a marked dewpoint gradient and wind veer and within in a strongly-sheared environment. As such, line convection is expected embedded within the main broader frontal precipitation band. This may produce some squally conditions, with short duration bursts of heavy rain and gusty winds (aside from the strong gradient winds present ahead of the front). Such circumstances can occasionally allow brief (tornado) spin-ups, but despite the presence of convection weak instability, limited convective depth and rather saturated profiles suggests little in the way of lightning is expected.

The post-frontal environment, and associated cold pool overspreading Ireland and northern and western Britain later in the day and overnight, will result in steepening mid-level lapse rates and a few hundred J/kg CAPE. Scattered showers will affect many exposed western areas during Monday night, most frequent over NW Scotland where the risk of some sporadic lightning is greatest (albeit still a relatively low risk in any one location). Some hail and gusty winds may accompany the most-organised cells.