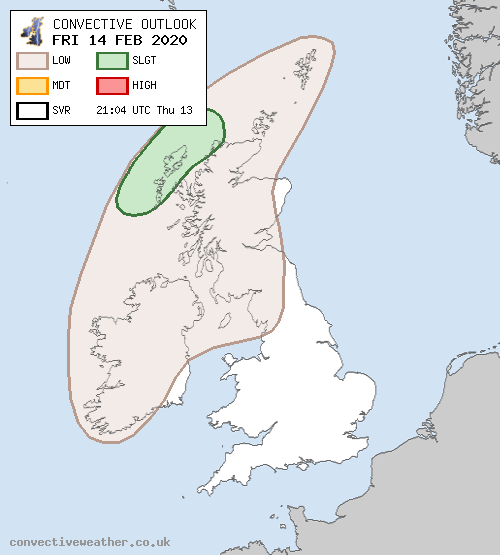 Some line convection is possible along the cold front as it tracks eastwards across Ireland on Friday morning, but this is expected to weaken with time and the lightning risk is considered very low overall. This may also be followed immediately by a post-frontal trough, also with elements of line convection. Behind the front, cool air aloft will steepen mid-level lapse rates and generate up to 600 J/kg CAPE over the Atlantic, just 100 J/kg inland over Ireland and Scotland. Nonetheless, the environment will be strongly sheared, and so scattered showers affecting these areas during Friday daytime may produce a few isolated lightning strikes. The areas at greatest risk of some sporadic lightning are the Outer Hebrides, with greater proximity to larger offshore CAPE - a low-end SLGT has been introduced, but it is likely most of any lightning activity may remain offshore to the west of these areas (peak time mid-afternoon Friday).