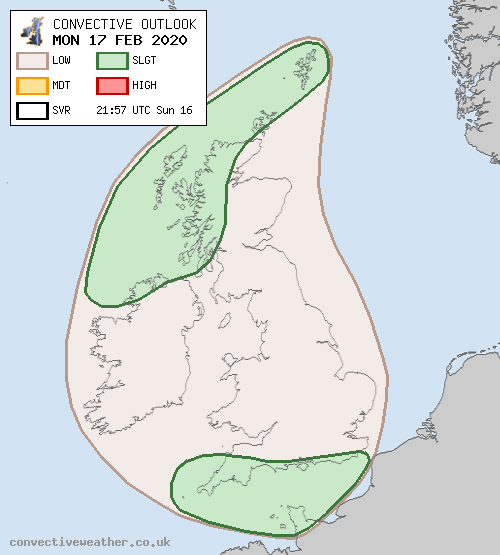 Broad upper trough will spread gradually eastwards across the British Isles on Monday, characterised by steep mid-level lapse rates and 300-500 J/kg CAPE over seas. The net result, being within the trough base, is that shear will be weaker than previous days and so the lightning potential will be more strongly related to both instability and any organised features swinging through the in the flow. One such feature, which will still be in the last of the strongly-sheared environment, will be located over SE England and the eastern English Channel first thing on Monday morning, and could produce some hail and strong gusts of wind.

Thereafter, the main focus for lightning will be related to two cold pools drifting eastwards - one, associated with a marked area of deep convection, will drift across SW England and through the English Channel during Monday daytime. The second cold pool will approach western Scotland and NW Ireland later in the afternoon and into the evening hours. Some sporadic lightning will be possible with both of these features, and as a result a couple of low-end SLGTs have been introduced. However, given weaker shear it is likely any lightning will be less widespread than the past couple of days.