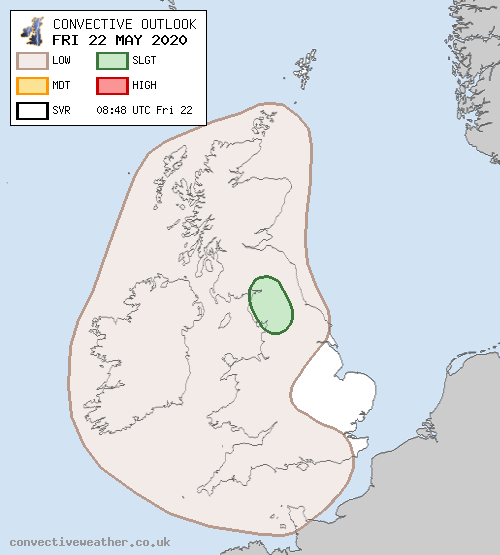 Deep area of low to the west of Ireland will migrate northeastwards to pass close to the Outer Hebrides by Friday evening. Frontal rain will continue to clear eastwards across Scotland and England, although the wrap-around occlusion will feed persistent moist air of tropical origin onto the upslopes of western Scotland, bringing significant rain accumulations. South of the low, a strong southwesterly flow will feed a moist low-level airmass eastwards beneath a markedly dry mid/upper troposhere. Numerous showers are expected in Ireland and southern Scotland, aided by diurnal heating and subtle shortwaves moving through in the flow aloft. Convection will generally be restricted to below 700mb due to a mid-level capping inversion, although may be able to periodically push up to 600mb (ELTs around -20C) as shortwaves temporarily cool the mid-levels. Instability is a little meagre, generally around 100-300 J/kg CAPE, but 30-40kts shear in the cloud-bearing layer may aid in updraft/downdraft separation to sustain cells and produce a few isolated lightning strikes.

Shower activity will probably be rather restricted across England and Wales during daylight hours on Friday due to a relatively shallow convective layer, however this is expected to deepen through the evening and night hours as the upper trough slowly advances southwards. Showers will be most prevalent over western hills, where moist low-level flow is forced up over high ground. The risk of lightning will therefore increase across western Britain during the evening and night hours, especially so perhaps over Cumbria / northern Pennines where a low-end SLGT (30% chance) has been introduced, but for most areas is still considered below SLGT threshold (20% chance). Parts of west and south Wales may also be considered for a low-end SLGT if confidence improves. Gusty winds and hail up to 1.0cm in diameter are possible from the strongest cells, particularly during the night hours.