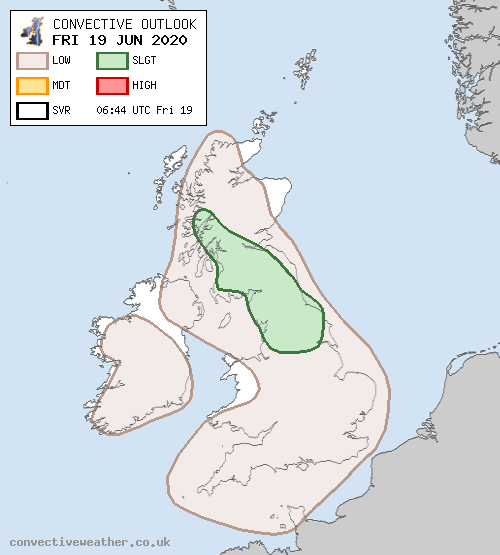 Negatively-tilted upper trough, having lingered close to Britain and Ireland through most of this week, will finally relax away to the north on Friday, marking an end to this very thundery spell of weather. At the surface, a frontal zone will provide thick cloud and outbreaks of rain across Ireland, Wales, SW England and into parts of the Midlands on Friday morning, lifting gradually northwards while decaying. Ahead of this, a moist low-level airmass will reside across northern England characterised by dewpoints of 12-14C, and this too will also migrate northwards into southern Scotland through the day. Provided low cloud and hill fog can thin and break to allow some modest surface heating, this could yield 300-600 J/kg CAPE in an environment with 10-20kts deep layer shear. Forecast profiles suggest a warm bulge in the 500-650mb layer may restrict the depth of convection, at least initially, but a combination of orographic forcing, some low-level convergence and surface temperatures of 16-18C should be able to pass this layer, aided also by a PVA lobe drifting north around the base of the upper trough. CAPE will be rather skinny, but nonetheless a few sporadic lightning strikes will be possible from the most intense cells. Some element of shower training may occur over Argyll and perhaps Ayshire, and here there is a risk of localised surface water flooding late in the day. A few funnel clouds may also be possible.

Some uncertainty as to how quickly showers may develop, and therefore how far south to include the SLGT (earlier initiation will result in a higher chance of lightning across southern parts of northern England, for example, before the focus shifts north through the afternoon and evening). Activity will gradually weaken through the evening hours. Elsewhere, a few shallow showers will be possible over the Republic of Ireland and central/southern England, but with ELTs at -10C or warmer the risk of lightning is considered very low (5-10%, but perhaps 15-20% over Lincolnshire and Norfolk). Overnight, a strip of PVA will drift northeastwards across central and southern Britain, and here there may be a few elevated showers during the early hours of Saturday, but again the risk of lightning is considered very low.