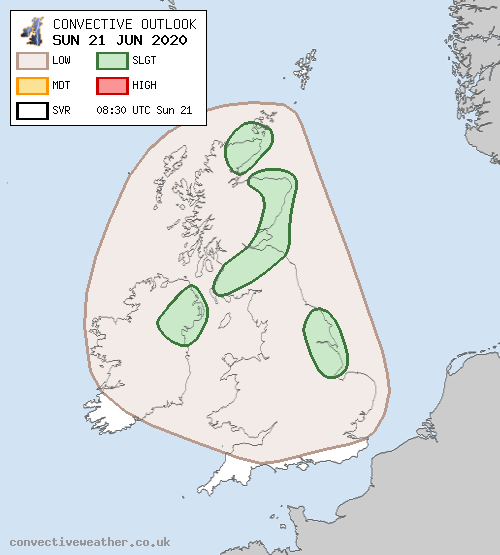 An upper trough axis will move northeastwards across Britain and Ireland on Sunday, while extending. At the surface, cloud and rain associated with a frontal system will gradually clear Scotland and eastern England, followed quite widely by a showery airmass as cold air aloft overspreads relatively warm SSTs and diurnal heating inland. Numerous showers are expected to develop through the day, initially across Ireland but extending to much of Scotland, with a few also likely scattered across England and Wales. Showers will at times become organised into distinct lines where local topography aids convergence, such as peninsular and estuary convergence parallel to the southwesterly flow. Showers may become organised into a more active cluster across Ireland from late morning, spreading into Scotland during the afternoon.

Either way, given 400-700 J/kg CAPE and steep mid-level lapse rates, a few isolated to sporadic lightning strikes will be possible, more especially within the several low-end SLGTs (25-30%) issued. Shear will tend to reduce across Scotland during the afternoon, while 20-40kts will persist across northern and eastern England - however, this will be accompanied by a notable mid-level cap which will generally restrict convective depth and perhaps limit the depth of convection to below the stronger flow aloft, casting some uncertainty as to whether much lightning will actually occur here, despite ample CAPE. Hail is likely in some of the showers, perhaps locally 1.0-1.5cm in diameter. Showers will gradually fade through the evening hours, as diurnal heating subsides and the upper trough exits to the North Sea.