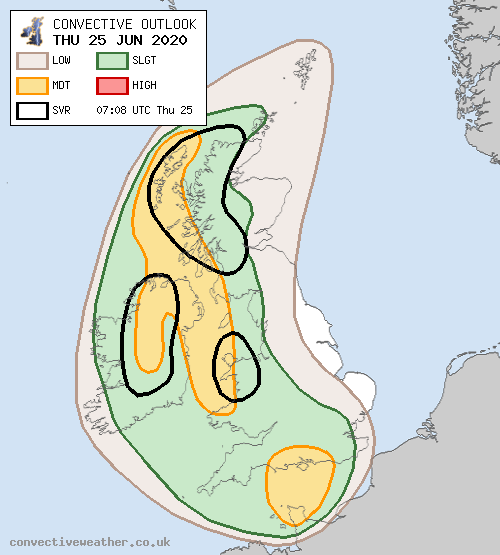 Longwave trough over the Atlantic will slowly approach Britain and Ireland through Thursday, aiding destabilisation of an instability plume courtesy of several PV lobes running northwards in the southerly flow aloft. This will result in multiple outbreaks of thunderstorms (mostly elevated) at various times during this forecast period.

... SCOTLAND ...
At 06z Thursday, elevated convection is likely to be ongoing or developing more widely across parts of Scotland, drifting generally northwards and becoming increasingly confined to the NW Highlands / Hebrides by early afternoon where coverage may continue to increase through the afternoon hours - more especially near Lewis/Harris.
In its wake, if sufficient cloud breaks can develop across the western half of Scotland then diurnal heating could yield 800-1,500 J/kg CAPE as surface temperatures climb to 24-27C with dewpoints around 15-18C. The presence of an EML will act as a cap much of the time, restricting convective development and resulting in a "loaded gun" environment. However, upslope flow over the mountains, perhaps also enhanced somewhat by differential heating boundaries, may provide enough forcing to create a few isolated but explosive surface-based thunderstorms (primarily mainland). The thermodynamic and kinematic environment would be supportive of storm organisation and potentially supercells, capable of producing large hail 3-4cm in diameter, frequent lightning and strong outflow gusts. While the overall threat is low, if storms can become sufficiently organised then the parameter space may be conducive to an isolated tornado, although the highly variable topography in this area can both serve to hinder or indeed enhance this potential depending on its influence on the low-level wind field.
A SVR has been introduced primarily for the threat for locally large, damaging hail. Some localised surface water flooding may also occur. Surface-based storms that do manage to develop over the mainland will drift generally to the N or NNW, potentially moving across parts of the Hebrides during the evening hours - however, those that develop significant mid-level rotation may deviate to the right and head more to the NE, at least for a time.
Overnight, a marked PV lobe will lift north from Ireland towards western Scotland and elevated thunderstorms are likely to become numerous, especially over and/or near the Hebrides during the early hours of Friday. Depending on how many manage to move over some islands, elements of training will bring the risk of localised flooding. Strong outflow winds are possible. Lightning will likely be quite frequent too given the reservoir of CAPE, although the environment is likely to become rather worked-over towards the end of the night and so lightning activity will likely decrease later as a result.
... NORTHERN IRELAND / REPUBLIC OF IRELAND ...
A few elevated showers/thunderstorms may be possible over Ulster during Thursday morning, clearing northwards. Elsewhere, a northward-moving shortwave may result in some elevated convection developing in the vicinity of the Isles of Scilly / Celtic Sea on Thursday morning, which may bring both an increase in mid-level cloud and perhaps a few elevated showers/thunderstorms into SE Ireland by early afternoon, continuing to lift north with time. Even if this elevated convection is not deep enough to produce lightning, the additional cloud cover spilling north may have some negative impact on surface heating. Assuming the cloud is not too extensive and/or fairly broken, diurnal heating could yield 500-1,000 J/kg CAPE by the afternoon and evening hours. Profiles look capped to surface-based convection initially, but mid-level cooling and lift associated with the aforementioned shortwave could lead to scattered thunderstorms erupting during the evening hours (if not earlier), especially in the vicinity of the Central Plain.
Similar to western Scotland (albeit profiles slightly more V-B-V), for a few hours the environment would be favourable for cell organisation and possibly supercells capable of producing large hail 3-4cm in diameter, frequent lightning and strong outflow gusts. A SVR has been issued primarily for the risk of locally damaging hail and flash flooding. This will be dependent on sufficient surface heating, otherwise surface-based convection may struggle to initiate. Either way, stronger forcing aloft will arrive towards mid-evening, and so thunderstorms are likely to become more numerous and increasingly elevated, especially across central/northern Ireland and eventually drifting northwards offshore over the Atlantic and towards the Hebrides. With several thunderstorms potentially training over similar areas, this will bring the risk of local flooding. Most storms will generally drift to the N or NNW, but if mid-level rotation becomes strong enough some may deviate more to the NE.
... ENGLAND / WALES ...
Much of Thursday daytime will be dominated by capping, although there may be some elevated convection (and possible shower/thunderstorm activity) close to the Isles of Scilly and W Cornwall - but low confidence in this scenario. During the evening hours an isolated severe thunderstorm could develop in W / NW Wales where upslope flow and low-level convergence may aid in initiation - this perhaps most likely near Anglesey and then drifting offshore towards the Isle of Man. If convection can initiate here, large hail 2-3cm in diameter may be possible, and as such a SVR has been included.
Also during the evening hours elevated showers and thunderstorms are likely to begin to develop near Scilly / Cornwall / Devon, and this will then mark the beginning of several clusters that may develop through the evening and night as subtle impulses aloft engage with the instability axis, individual clusters migrating northwards while the plume migrates eastwards through the night - and hence the risk will expand erratically northwards and eastwards during the night. The exact coverage of elevated thunderstorms is uncertain, especially with eastward extent, however the steep mid-level lapse rates and substantial CAPE reservoir suggests that where they do occur lightning could be prolific, especially with any storms over the English Channel and adjacent coastal counties. A MDT has been introduced where the best multi-model consensus exists, but thunderstorms (with very frequent lightning) are still possible outside of this region.