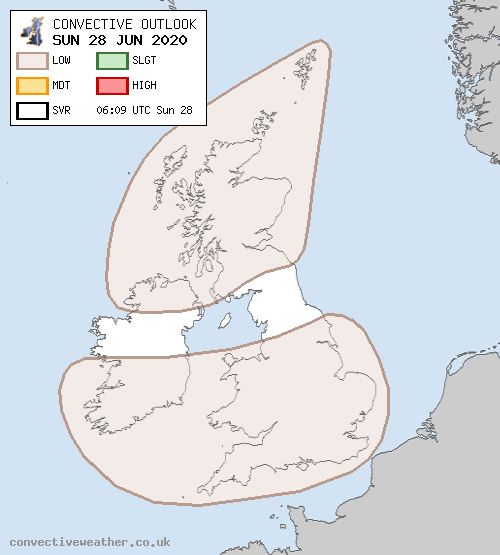 Upper low near northeast Scotland at 06z Sunday will tend to swing anticlockwise in an almost full loop across northern and central Scotland during this forecast period. The net result is little overall change to the upper profile during this time, with cool air aloft combining with diurnal heating to generate some marginal CAPE where sufficient insolation occurs. Since longer spells of rain associated with a wrap-around occlusion are likely across Northern Ireland, northern England and much of Scotland at times, the more likely areas to see surface heating are southern Ireland across to central/southern Britain. However, increasingly dry mid-level air will overspread these areas, restricting the depth of convection such that despite showers developing the overall risk of lightning is very low (5-10%). A slightly higher risk may exist over East Anglia (10-15%) where the dry mid-level air arrives later in the day, but any lightning would likely be isolated at best.

Elsewhere, close to the low centre some insolation may occur over Caithness and Sutherland in the morning, shifting to the Grampian / Moray / Aberdeenshire region by the afternoon, which may aid in some more substantial CAPE (300-500 J/kg) and a greater risk of a few heavy showers developing in response to low-level convergence and orographic forcing. Consequently there could be a few sporadic lightning strikes in this area (20-25% chance). This very much depends on the shape of the surface low and position of frontal rain, which will hinder any deep convection from occurring if sufficient surface heating fails to materialise.