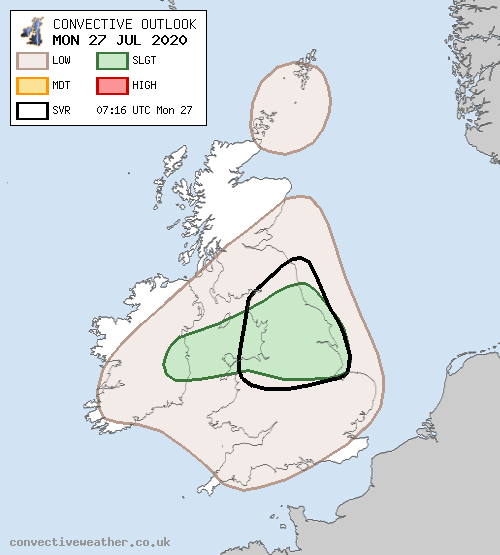 A deepening surface low will track northeast across Ireland, southern Scotland / northern England and out to the North Sea on Monday, beneath and to the north of a strong jet stream and on the forward side of a sharpening upper trough. Extensive cloud and outbreaks of rain are expected across many parts of the British Isles, given the high dewpoint airmass (14-17C) and rather saturated profiles. While some pockets of elevated convection, and hence a few isolated lightning strikes, will be possible embedded within broad areas of showery rain, the main focus during this forecast period will be close to the triple point and the area between the cold front and back-bent occlusion (which effectively acts as the true surface cold front, exhibiting the greatest dewpoint gradient and wind veer). Substantial forcing aloft combined with modest surface heating may be sufficient to generate some deep convection in an environment with 30-40kts bulk shear. Forecast profiles exhibit very moist low-levels overlain by marked dry air aloft, albeit with a slight warm nose in the ~600mb layer. If sufficient breaks in the cloud can allow insolation to lift surface temperatures to nearer 18-20C, then this may be able to pass the warm nose.

Regardless, should deep convection develop, the environment would be supportive for organisation (perhaps even a low-topped supercell). Relatively low cloud bases and strong low-level shear, with somewhat backed surface winds, suggests the risk of an isolated tornado. The main risk zone/period is from eastern Ireland during the morning, transferring eastwards to northern England / north Wales / northern Midlands from late morning and into the afternoon hours. A SVR has been introduced for the risk of an isolated tornado - while some hail may be possible, it is unlikely to be severe and with showers/storms moving fairly quickly in the strong flow aloft this should also limit the flash flood risk too.
Some sporadic lightning may be possible from one or two cells that become organised, and while individual cells may be long-lasting, aside from this risk lightning will probably not be too widespread given rather skinny CAPE (and concerns over cloud cover, which may inhibit any substantial convection from developing in either case!). Tentatively issued a low-end SLGT, but it is possible many areas within this region may be void of lightning. Additional showers are likely farther south during the afternoon, but within the SMZ the depth of convection will likely be too shallow for lightning.