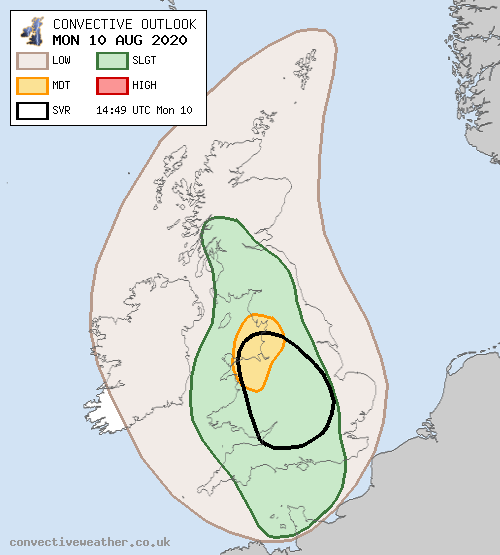 UPDATE 14:49 UTC MDT introduced across N Wales and NW England for this evening/tonight, SLGT extended into W Scotland for tonight and expanded across southern England for the risk of a few scattered elevated showers/storms tonight
Atlantic upper longwave trough will gradually sharpen on Monday, placing the British Isles under a broad southerly flow aloft. This will continue to advect a plume of high Theta-W slowly northwestwards through the forecast period, with a marked elevated mixed layer (EML) covering much of England and Wales and creating an environment with notably steep mid-level lapse rates.
... SUMMARY ...
... WALES / NW ENGLAND / IRISH SEA / SW SCOTLAND - MONDAY DAYTIME ...
Elevated convection (bases around 8-10,000ft) is likely to be ongoing on Monday morning across parts of Wales, SW England and perhaps NW England, lifting gradually north through the day while expanding in coverage as a shortwave engages with a Theta-E ridge. Given the steep mid-level lapse rates and 500-700 J/kg CAPE, lightning is likely to be quite frequent in the most intense cells - especially over west Wales and parts of the Irish Sea where a greater coverage of lightning is expected. Lightning activity may weaken as storms approach the Isle of Man / eastern Northern Ireland / SW Scotland as profiles become increasingly saturated and instability weakens. Some hail may be possible, although the high cloud base and depth of hot air below suggests a lot of this will melt or shrink in size by the time it reaches the surface.
Elsewhere, isolated elevated showers/thunderstorms will be possible in a zone from Wales across the Midlands and SE England as a weak PV filament lifts north and engages the plume.
... MIDLANDS / E WALES - MONDAY AFTERNOON / EVENING ...
Strong surface heating is expected across southern and eastern England, with a slack low evolving in the vicinity of the M4 corridor. The EML will serve as a cap to surface-based development, and with T850s gradually warming through the day across SE England and East Anglia, these areas are likely to remain capped. However, some slight cooling at 850mb is possible over the West Country / SW Midlands, and IF surface temperatures can nudge close to the required trigger temperature of 30-32C (assuming dewpoints around 18-19C) this could breach the capping inversion and lead to explosive development in a loaded-gun environment, especially when aided by low-level convergence near the surface low centre and a PV lobe arriving from the English Channel.
Should deep convection occur, the backed low-level winds north of the surface low and modest flow aloft will create 20-30kts DLS which may be sufficient for organisation and perhaps supercellular mode. Given the substantial CAPE (1,000-1,500 J/kg) and steep mid-level lapse rates, very frequent lightning and large, damaging hail 2-4cm in diameter would be possible (although possibly shrinking somewhat in size as it falls through the hot surface air before reaching the ground). PWAT near 40mm and storm motion of ~20mph brings the risk of prolonged torrential downpours and flash flooding. Should storms exhibit supercellular characteristics, then they may deviate to the right of the mean flow and slow their forward speed. Given the large T-Td spread, cloud bases may initially be quite high, around 6,000ft - but due to a combination of storm processes, northward movement into less-hot air and nocturnal cooling of the boundary layer, cloud bases may steadily lower during the evening hours. Backed low-level winds will create 20-30kts LLS, which may bring the risk of an isolated tornado if cloud bases can lower substantially. Otherwise, inverted-V profiles suggests the risk of strong downburst winds 45-55mph. A SVR has been issued primarily for the threat of large hail and flash flooding, and to a lesser extent for strong winds and an isolated tornado.
The greatest risk of severe thunderstorms appears to be initially close to the M4 corridor and SE Wales, shifting northwards into the south / central / west Midlands and east Wales during the evening, and then NW England / Irish Sea later. However, as storms run north into an increasingly capped environment, they may become more elevated in nature. Much of this depends on how strong the cap is during Monday afternoon...
... NORTHERN ENGLAND / SOUTHERN SCOTLAND - MONDAY EVENING / NIGHT ...
As the shortwave ejecting north from France arrives during the evening hours, existing thunderstorms over the Midlands and/or new thunderstorms over NW England will likely grow upscale into a complex of primarily elevated thunderstorms over Cen N / NW England, while migrating northwards through the night towards southern Scotland. Lightning could be quite frequent in the strongest cells, and the threat of localised flooding exists from prolonged downpours. Some hail and gusty winds are also possible.
... ENGLISH CHANNEL - MONDAY NIGHT ...
A few other elevated showers/thunderstorms may be possible in parts of western mainland Scotland, and perhaps also exiting northern France and across the Channel Islands / English Channel towards S / SE England during the overnight period.