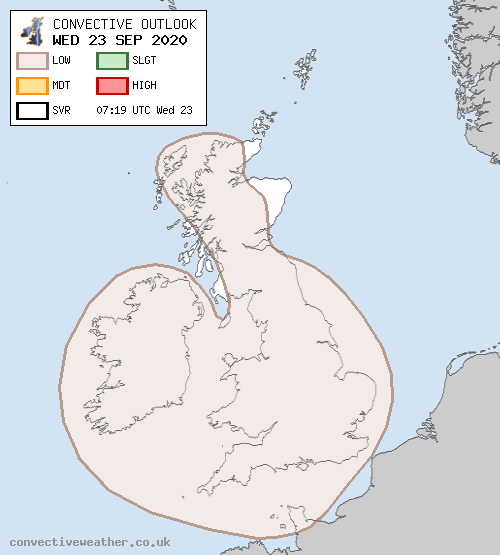 A rather messy pattern is anticipated on Wednesday, under the influence of the forward side of a longwave upper trough. Pulses of showery rain across East Anglia and SE England this morning will gradually clear, and there may be scope for some limited surface heating to occur during the middle part of the day ahead of the cold front (and associated band of rain). As a marked dry intrusion overspreads the area during the afternoon, this combined with additional surface heating could aid in the development of heavy showers, some perhaps capable of producing a few lightning strikes. A jet streak will round the base of the upper trough, placing eastern England under the left exit by this evening - and ultimately promoting more widespread lift with an area of low pressure developing over the North Sea, and rainfall perhaps developing a little more widely / more intense before it moves offshore. Consequently there may be a slight uptick in a few sporadic lightning strikes across eastern England during the late afternoon / evening hours before the precipitation moves offshore. A SLGT may be considered here if confidence improves.

Elsewhere, a few showers are likely during the day with a small risk of isolated lightning, but overnight the focus will turn to the next approaching area of low pressure, with an organised band of showery rain spreading from Ireland into Wales and SW England during the early hours of Thursday. Given a few hundred J/kg CAPE and strong shear, a few sporadic lightning strikes may be possible with this feature - primarily near southern and western coasts. Indeed, with strong low-level shear and backed surface winds ahead an isolated tornado may be possible, aside from the existing potential for locally strong gusts of wind 50-70mph. Some hail may also be possible, especially in showers that will also follow this initial band of showery rain.