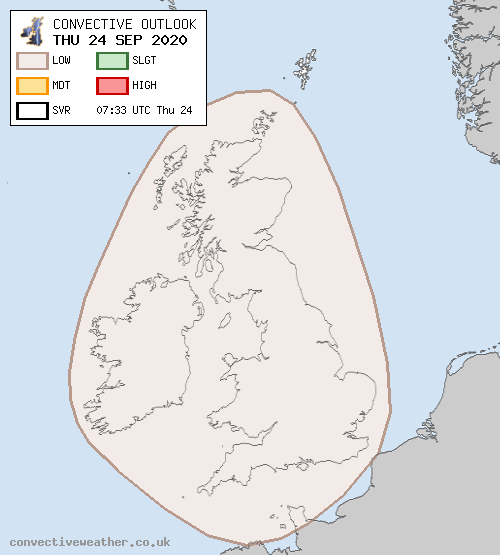 Longwave upper trough will migrate eastwards across the British Isles on Thursday, with a substantial cold pool aloft atop warm seas and modest diurnal heating inland. Various bands of rain and showers will rotate around a surface low located over the southern Irish Sea at 12z, Bristol Channel by 18z, Isle of Wight at 00z and finally decaying over NE France by 06z as a new centre forms over the middle of the North Sea. Essentially a few sporadic lightning strikes could occur almost anywhere where cells become intense, but primarily focussed near coastal areas with onshore flow given the increased instability provided by the warm seas at this time of year. These areas are considered a 15-20% chance, generally below SLGT levels. Steep low-level lapse rates and enhanced vorticity, especially near the surface low centre, will promote a very favourable environment for a few waterspouts - particularly down the Irish Sea during Thursday daytime, and then along the English Channel overnight. Hail is likely in many showers.