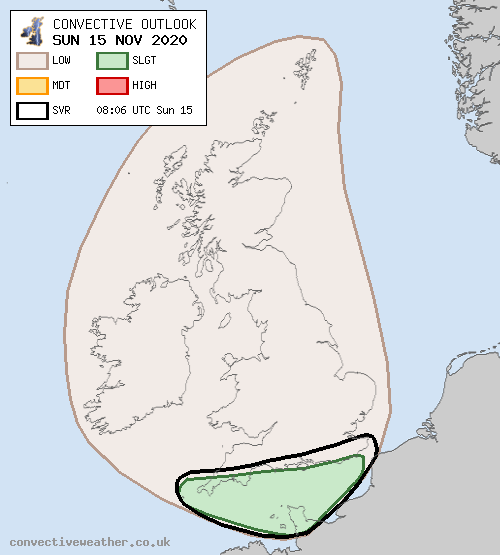 A potent upper trough will swing northeastwards across the British Isles on Sunday. Initially, divergence on the forward side will encourage heavy precipitation to develop and run northeastwards across parts of the English Channel into SE England and East Anglia. Some weak instability will likely be present, bringing the risk of a few isolated lightning strikes - but the risk overall is considered relatively low (10-15%). Showery precipitation is also likely elsewhere on Sunday morning, moving northwards and eastwards with a low risk of lightning. Given the strongly-sheared environment, some line segments will be possible in places.

The main focus for deep convection, and hence a greater risk of lightning (15-20%), will be from mid-late morning over parts of Wales and SW England as heavy showers develop and move inland. Hail is likely in several of these showers, along with perhaps a few sporadic lightning strikes. By the afternoon, a more organised comma-cloud feature associated with a tropopause fold is expected to quickly slide eastwards through the English Channel, pushing into parts of southern England. The most active portion of this feature is likely to remain offshore (and over the Channel Islands) where the greatest risk of lightning and strong outflow winds will exist - in fact there is fairly good model agreement on gusts of 70-80mph over the English Channel given a marked low-level jet. As a result, a SVR has been introduced for the risk of damaging winds (primarily offshore), and to a lesser extent for an isolated tornado - much depends on how active this feature is, and the exact track and interaction with the coastline of southern England. By Sunday evening showers will likely weaken and decay due to a combination of nocturnal cooling inland, and the upper trough departing.