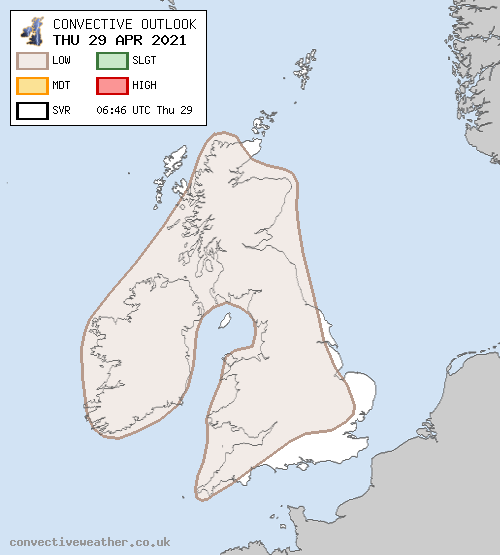 A broad upper trough covers much of northern and western Europe, the associated cold pool in conjunction with diurnal heating yielding a couple hundred J/kg CAPE. While scattered showers will become more numerous for the afternoon and evening hours, the depth of convection for the most part will be quite restricted and so generally the risk of lightning is barely 5% in most areas. However, within the base of the upper trough steeper mid-level lapse rates will exist over Ireland, with CAPE up to 400 J/kg locally - and so overall Ireland has a greater risk of a few isolated lightning strikes (10%). Small hail will likely accompany many of the showers. The generally slack surface flow and resultant low-level convergence combined with steep low-level lapse rates could allow a couple of funnel clouds to develop - more especially in W / NW Ireland.