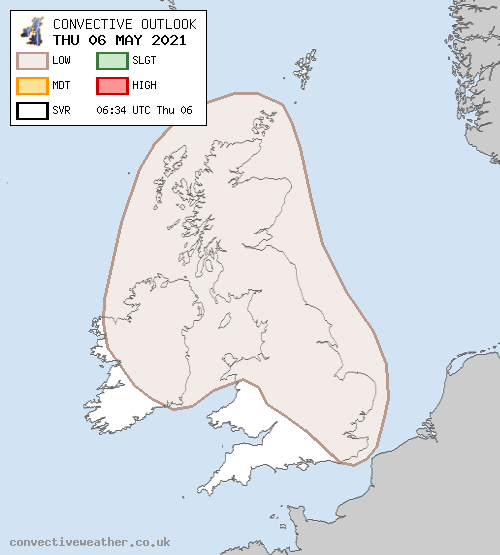 An upper low will drift slowly southwards down the North Sea on Thursday, embedded within the broad trough / cold pool that covers much of northern Europe. Once again another day with steep mid-level lapse rates and 300-600 J/kg CAPE in response to diurnal heating, and consequently numerous showers developing as a result. That said, a couple of more organised features will be present - an occlusion will bring a period of sleet and snow across Scotland initially, this tending to break up through the day as it continues to extend southwards into northern England in part due to convective overturning. A secondary feature will tend to form a line of showery rain across E Anglia / Midlands / S Wales slowly clearing southeastwards with time.

Away from western coasts, the flow in the low-levels will be fairly weak but with some modest flow in the mid-levels around the periphery of the upper low. Ultimately the steering direction will tend to gradually change through the day as the upper low slides southwards - this will also be true about the potential for organisation of cells depending on their location to the stronger flow aloft (within the trough axis shear will be relatively weak). For example, on the rear side of the upper low forecast profiles over NE England / SE Scotland later in the afternoon exhibit curved hodographs with NW-ly surface winds veering NE-ly aloft. On the forward side, stronger speed shear is likely to be present over East Anglia / Lincs etc which may allow for better organisation of storms later in the day, and in this case hail size could be a little larger nearer 1cm in diameter. Regardless, copious amounts of hail are likely in some of the more intense cells, enough to cover roads and cause difficult driving conditions, and some local gusts of 40-50mph may also be possible.