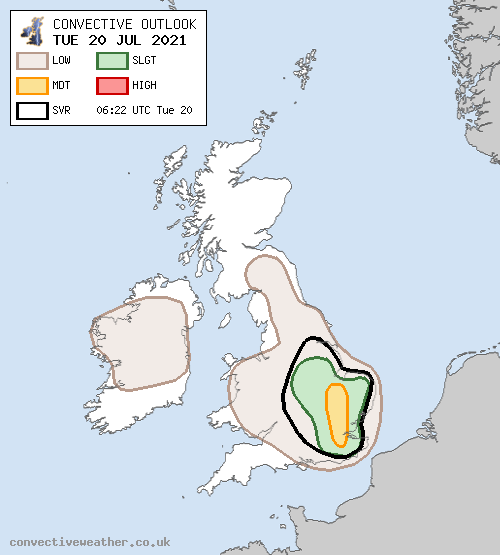 Upper ridge continues to cover Ireland and southern/western Britain on Tuesday, but with a more pronounced upper trough sliding slowly southeastwards over eastern England and the North Sea through the day. This will aid both cooling of the mid/upper levels (therefore increasing instability) and promote broad lift across the area - and as such the environment will be more conducive to more numerous thunderstorms than was the case on Monday. That said, profiles are still quite dry with hints of some subtle warm noses that could inhibit deep convection, at least initially, but overall this may help to keep cells spaced apart somewhat (although inevitably some backbuilding/daughter cells generated by outflow may fill these gaps with time).

Strong heating of a moist low-level airmass (dewpoints of 17-19C with 2m temperatures likely to peak around 28-31C) will yield substantial CAPE, in the range 900-1,500 J/kg. Forecast soundings suggest surface temperatures of 27-28C will be required for convective initiation, and while convective cloud may take several attempts to gain some height in a broad sense, rapid upward motion is likely where forced ascent from the surface occurs (convergence zones and upslope flow over the Downs/Chilterns etc). Therefore it is these zones that will provide the primary focus for sustained and explosive development, probably not until around 12-1pm BST but continuing through the afternoon and early evening hours. The areas at greatest risk will typically be closest to the upper trough where instability will be maximised, capping less of an issue and better forced ascent - hence the SLGT issued. While undisturbed convergence zones may look rather neat/obvious initially, outflow/cold pools and storm interactions will create a rather distorted surface pattern through the afternoon which will naturally make it difficult to predict where new cells could develop at these longer lead times. Nonetheless, it seems plausible multiple thunderstorms could develop in the East Midlands, East Anglia and parts of SE England through the afternoon and early evening, some evolving into clusters, before eventually weakening.
Around the southwestern flank of the upper trough, slightly stronger west/northwesterly flow will be present across the East Midlands and East Anglia, which coupled with weak and locally backed surface winds (potential for rotating updrafts) will result in 20-30kts DLS, and this may aid storm longevity at times. The rapid upward motion aiding vorticity stretching along convergence zones could allow a couple of funnel clouds / weak tornadoes, although for the most part the deeply-mixed boundary layer will result in fairly high cloud bases - but these may tend to lower towards evening. The primary hazards will be local flash flooding but also frequent lightning and large hail, potentially 2-3cm in diameter in the strongest cells - and as such a SVR has been introduced. Wind gusts in excess of 50mph could also occur given the well-mixed, deep sub-cloud layer.
Other isolated heavy showers / thunderstorms will be possible, such as over the hills/mountains of the Pennines, southern Scotland and Wales, and central/northern portions of Ireland - but the risk of lightning is lower given issues with either restricted cloud depth or too much dry/subsided air aloft. NW Ireland is probably the most likely area to see a few sporadic lightning strikes, but low confidence precludes the introduction of a SLGT.