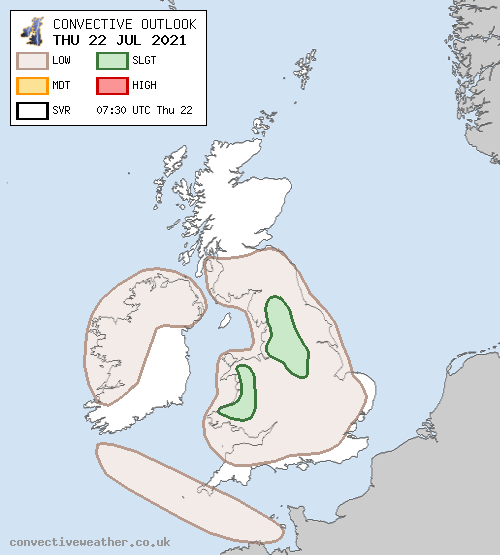 Another day with upper ridging covering the UK/Ireland, with quite dry mid-level profiles. The main difference compared to previous days is increasing upper-level moisture from the southwest, with high cloud extending across Ireland and western Britain. For the most part, potential for deep convection will be strongly tied to forced ascent from the surface due to low-level convergence and upslope flow over high ground. Diurnal heating of a moist low-levels (16-19C dewpoints) will yield 500-1,000 J/kg CAPE. Forecast profiles suggest a combination of both very dry mid-level air and a warm nose at 750-850mb could restrict the height of convective cloud in many places. Despite the absence of significant forcing aloft, a few isolated heavy showers or thunderstorms may develop during the afternoon and evening hours over the high ground in Wales and the Pennines. These may drift southwards into the north Midlands. There is also a small risk in Somerset/north Devon as a minor shortwave approaches from the southwest later in the day, but confidence is too low to introduce a SLGT here. Light winds through the depth of the profile within the ridge axis will result in weak shear and largely pulse-mode (the strongest 700mb flow will be east of the Pennines), although locally backed surface winds will produce some directional shear. The magnitude of instability could result in some marginally-severe hail, alongside the risk of local flash flooding. In general, activity will tend to decay by mid-late evening.

Overnight, attention turns to the Southwest Approaches as a destabilising plume gradually approaches SW England. Most of this activity will likely remain offshore during this forecast period, but a LOW has been introduced to the tip of Cornwall and Isles of Scilly just in case elevated thunderstorms arrive quicker than currently expected towards the end of the night. Forecast profiles reveal mid-level instability with some reasonable cloud-layer shear, and so it could be quite active well-offshore during Thursday night.