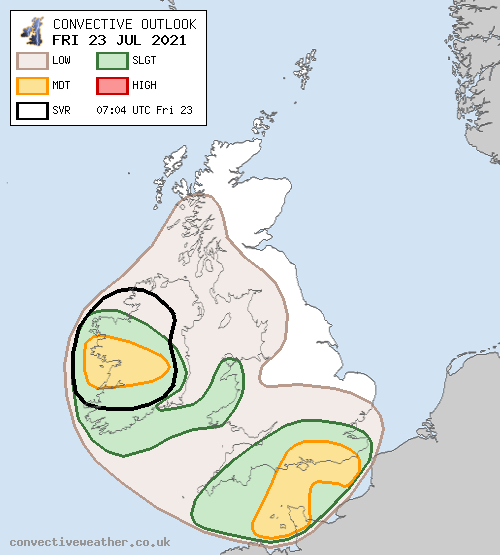 An active day of thunderstorms is anticipated across portions of the UK and Ireland on Friday/Friday night. A negatively-tilted longwave upper trough over the Atlantic will continue to lift northeastwards through this forecast period as the upper ridge, which has been dominant over the past week, becomes distorted and migrates northeastwards. The resultant strengthening easterly flow across central/southern Britain will shift a relatively high Theta-W airmass from over England and Wales westwards to Ireland, resulting in more stable profiles over Britain and increasingly unstable profiles over Ireland. During the evening and night hours, a more substantial Theta-W plume will slowly advect from France across the English Channel and southern England, with increasing instability here as a result.

... IRELAND ...
Diurnal heating of moist low-levels (dewpoints could be as high as 17-19C in places, with air temperatures once again locally exceeding 30C) will yield substantial SBCAPE, potentially >1,500 J/kg. Gradual cooling aloft and lowering heights as the main upper low over Biscay slowly approaches from the south, combined with low-level convergence and some forced ascent over high ground will all contribute to scattered thunderstorms developing from around 12-13z. These are expected to become more numerous through the afternoon and early evening as they drift gradually WNW-wards.
Profiles suggest fairly unidirectional winds with height, with some modest flow in the mid-levels contributing to marginal wind shear, but the magnitude of CAPE coupled with a marked dry layer in the mid-levels suggests some active thunderstorms are likely, with frequent lightning and the potential for large hail 2-4cm in diameter. In fact, the strongest cells may perhaps display some transient supercellular structures. Strong outflow winds could gust over 50mph locally, and substantial cold pooling may develop in western Ireland later in the afternoon resulting in several daughter cells developing in clusters nearby. Most thunderstorms will likely decay during the mid-late evening, however some may persist and/or additional cells develop across Munster perhaps even into the early hours of Saturday, especially near the south coast. Given PWAT of 30-35mm and the potential for training of cells, flash flooding will also be possible.
... SW SCOTLAND / CUMBRIA / WEST WALES ...
Diurnal heating, aided by föhn effect due to a strengthening easterly breeze, will result in temperatures in the mid-high 20s Celsius by the afternoon hours to the lee of high ground. Some build-up of CAPE is anticipated, which coupled with onshore breezes converging with the easterly breeze over the high ground could result in a few isolated heavy showers or thunderstorms developing. These will typically drift westwards/offshore, fastest in Wales due to stronger steering winds. The strength of the easterly wind (especially in Wales) and its ability to hold the sea breeze offshore will affect the potential for isolated thunderstorm development.
... CHANNEL ISLANDS / SOUTHERN ENGLAND ...
Throughout the day there is a risk of the odd elevated shower/thunderstorm passing close to the Isles of Scilly and tip of Cornwall, but the main focus begins late afternoon near the Channel Islands onwards. Profiles over NW France appear capped to surface-based convection, and would ideally require surface temperatures closer to the mid 30s Celsius. However, a combination of warm advection/isentropic upglide and forced ascent from divergence aloft as the upper low over Biscay approaches is expected to result in elevated thunderstorms developing, already present over the Bay of Biscay in the morning and these then migrating across the Brest peninsula to the Channel Islands around late afternoon/early evening. A slow migration northwards is then expected through the evening and night hours into southern England.
As is often the case with elevated thunderstorms the exact extent of lightning activity is uncertain; however profiles exhibit potential for deep convection rooted from the 800-850mb layer with substantial cloud-layer shear and dry mid-levels to support some potentially fairly active thunderstorms. The greatest instability and steepest mid-level lapse rates will naturally be towards the eastern half of the English Channel closest to the main untouched Theta-W plume emanating from France. Nonetheless, elevated thunderstorms are likely over the English Channel, perhaps as far west as Devon/south Cornwall initially, but the focus for lightning through the night may become confined to areas further to the east with time as thunderstorms in the west weaken and merge into more generic areas of heavy, convective rainfall with fairly saturated profiles. In fact, it may be the case that very little activity occurs east of the Isle of Wight until the early hours, with the potential for an uptick in activity to develop over S / SE England during the early hours of Saturday.
Analysis of cross-section data suggests there may be two main features - the bulk of the thunderstorms along the cold front/occlusion, but scope for more isolated very high-based elevated storms perhaps earlier on a preceding pre-frontal trough. Cloud tops in the most potent storms could get close to 40,000ft, and despite the elevated nature it is possible a couple of storms over the English Channel and into Cen S / SE England may exhibit some transient supercellular characteristics which may pose the threat of some marginally-severe hail. The main hazard, however, will be heavy rain and flash flooding potential, alongside lightning. There will already be a brisk easterly wind through the English Channel due to the existing surface pressure gradient, however brief gusts 50-60mph may be possible near the most intense cells (even higher offshore).