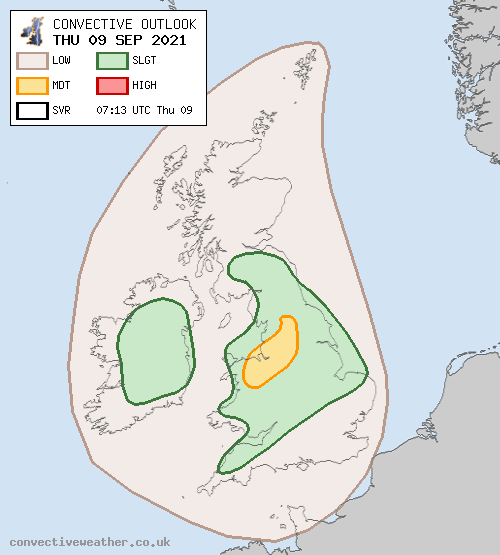 An upper low covers the UK and Ireland on Thursday, leading to a more widespread risk of showers and some thunderstorms compared with Wednesday. Early showery rain and embedded thunderstorm activity within a zone from Northern Ireland across to northern England will lift north into southern Scotland through the morning, although in general any lightning activity will probably decay. The main focus will be related to diurnal heating beneath cool mid-levels, resulting in 500-900 J/kg MLCAPE developing in many parts of England, Wales and Ireland. Numerous heavy showers and some thunderstorms are likely to develop, particularly where aided by orographic forcing and low-level convergence.

Some modest flow aloft across England in particular may allow some organisation/cell longevity, whereas weak shear over Ireland will tend to result in mostly pulse mode. Where the steering flow becomes near-parallel to convergence zones, multiple cells may train over the same areas and this brings a significant risk of local flooding - of particular concern is a corridor from N / NE Wales through NW England (especially given the number of urban areas in NW England) and also parts of the north Pennines towards southern Scotland. A MDT has been introduced where coverage of lightning may be greater overall, although an area of showery rain could move through this area from the south during the afternoon and limit surface heating for a while. The strongest cells could produce some marginally-severe hail.
Thunderstorms will slowly fade through the evening hours, but still possible across northern England and southern Scotland into the first part of the night. Meanwhile attention may turn to the central/eastern English Channel into SE England where a few showers and weak thunderstorms could approach during the evening/night as a shortwave lifts northeast. Some interest also exists for a few sporadic lightning strikes over the North Sea close to eastern Scotland during the night hours, shifting north towards the Northern Isles.