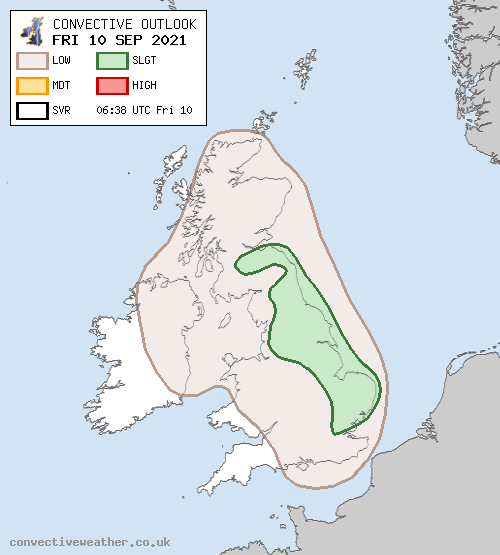 Upper trough over the UK/Ireland on Friday will relax northeastwards, but still overhead during the day to provide the potential for showers. As was the case on Thursday, this will be complicated somewhat by areas of cloud and showery rain which could both inhibit surface heating at times, but also likely break up into scattered showers as the day progresses. In either case, cool air aloft with surface heating will likely yield 300-700 J/kg MLCAPE with the potential for numerous showers to develop across central/eastern/northern portions of both Britain and Ireland in particular. The steepest mid-level lapse rates will be over eastern Britain at midday, eventually shifting to the North Sea through the afternoon, but nonetheless a few thunderstorms will be possible - especially from the Pennines across to the E / NE England. Shear for the most part will be rather weak, and so showers/storms may tend to be pulse-type in nature but could still produce some local surface water flooding, alongside gusty winds and some hail. Activity will tend to decay during the evening hours.