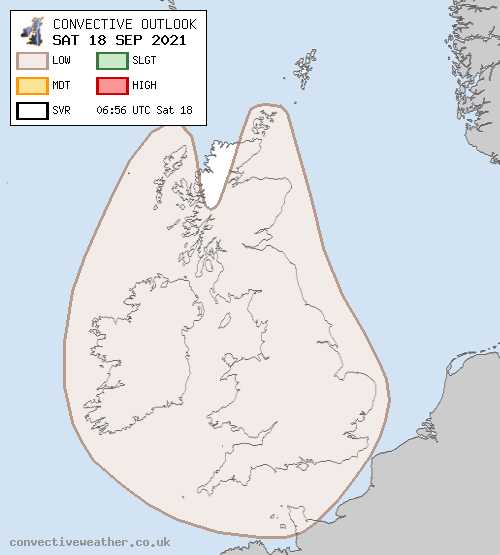 A cut-off upper low will be located over Biscay on Saturday, with an upper ridge broadly covering England and Wales. This will tend to retreat to the North Sea as an extending upper trough arrives from the Atlantic during the overnight period. An old frontal boundary will straddle E Scotland - NW England - Wales - SW England during Saturday daytime, providing the focus for thicker cloud and some patchy, showery rain at times. Near and to the east of this boundary, a rather humid airmass will cover much of England and Wales with dewpoints 14-16C and diurnal heating will yield a couple hundred J/kg CAPE. It seems plausible that a few heavy showers will develop, especially from mid-afternoon and continuing through the evening hours, across parts of Cen S / SW England, Wales, the Midlands and into N England (perhaps also as far east as the northern Home Counties). Forecast profiles are not overly-impressive, with warming aloft restricting the depth of convection, and generally weak flow through the cloud-bearing layer. It is not out of the question that one or two showers may be able to grow tall enough to produce a few lightning strikes, but the vast majority of showers will tend to be stunted in depth and so overall the lightning risk in any one location is relatively low.

During the evening and night, showers/rain will tend to grow upscale close to the frontal boundary over Wales, western England and into Scotland, with more organised areas of rain redeveloping and tracking northwards through the night. There could be an isolated lightning strike with this, but the risk again is rather low. Another Atlantic front will also approach western Ireland during the evening hours and could also produce a few isolated lightning strikes, but as the active portion of the upper trough tends to relax away to the northeast the front will tend to weaken through the night as it tracks east across Ireland and into western Scotland. Also, towards the end of the night a few showers could develop close to East Anglia.