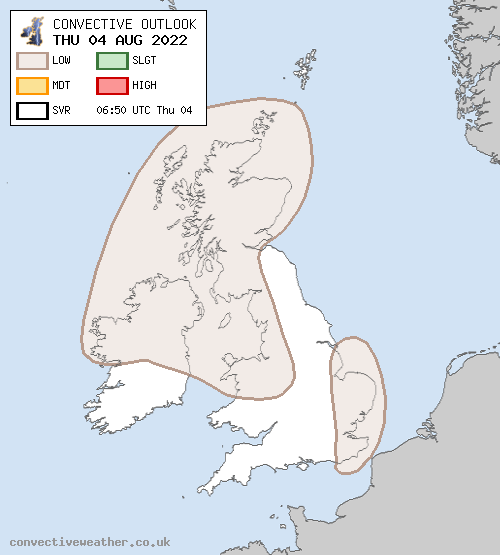 An upper trough will sharpen as it swings across the British Isles on Thursday night, the associated cold pool aloft atop SSTs of 13-17C and diurnal heating inland yielding TMax of similar values in Ireland, northern and western Britain generating a few hundred J/kg CAPE. Numerous showers will likely develop as a result and a few sporadic lightning strikes will be possible - perhaps more especially in N / NE Scotland although coverage is deemed too low to warrant a SLGT. The proximity of the upper trough will maintain a shower risk overnight, especially near western coasts and increasingly so for the likes of NW England and N Wales into the NW Midlands where added forcing from low-level convergence may be sufficient to tip the balance and produce a few lightning strikes in the vicinity of north Wales / Cheshire Gap.

Elsewhere, a residual tongue of humid air (850hPa Theta-W of ~12C) across East Anglia and SE England may provide the focus for scattered heavy, slow-moving showers to develop on Thursday night as increasing PVA on the forward side of the sharpening upper trough encourages broad ascent - aided also to an extent by persisting low-level wind convergence. Convection will be somewhat restricted in depth and so lightning activity is questionable, but a few sporadic strikes cannot be ruled out with the stronger cells. Some CAM guidance suggests 10-20mm will be possible in just a couple of hours, bringing the risk of some localised surface water flooding given the current parched ground, although it is certainly plausible the most intense cells could develop just offshore.